The final section of the OHT offers giant boulders, tranquil stream crossings, elk, views into hollows, and “The Narrows.”

The east end of the OHT is pretty challenging to reach. Because of this inaccessibility, it doesn’t receive a lot of TLC or usage. For this reason, it is also the most difficult section to follow.

However, for those hikers who do work through the difficulties associated with arranging shuttles and hiking a less manicured trail, it is a very rewarding piece of trail.

If you chose not to visit the Richland Creek Campground when ending the previous section, as the OHT reaches Forest Road 1205 veer right to hike the bridge over Richland Creek, then follow the gravel road a couple of hundred feet. As the road continues left the trail exits to the right.

This section of the OHT doesn’t have as much elevation changes as many of the previous do. It’s a gradual ascent to its highest elevation, followed by a long gradual descent. It also includes several stretches where the trail follows old roads.

In the early miles, during leaf-off, there will be nice views down into the Richland Creek drainage. Hikers will also view the first of many house-sized boulders along the trail, many covered in bright green moss.

There are several streams included throughout most of this section. During wet seasons many of these will include nice waterfalls and tranquil cascades to make for a lovely setting for a lunch break.

Just after mile 147, the trail makes a small drop into Armstrong Hollow for a creek crossing bordered by more giant rock boulders. Keep watch for the OHT white blazes in the following miles because the route crosses several 4-wheeler trails in this area. If you don’t pay attention, your hike will include some unwanted miles backtracking to the OHT.

Just before reaching mile 151, as you cross Forest Road 1201 (Richland Road) you pass through the Stack Rock Trailhead.

At mile 151.4 there is a fork in the trial. The main OHT turns left (white blazes), and a spur trail leads off to the right (blue blazes). This spur trail was once the OHT; however, in 2017, a landslide took out a chunk of the path. The OHTA volunteers had to build a reroute in 2018. The spur trail does run down to an old homesite, complete with a chimney and remains of a root cellar that is pretty interesting to visit.

The reroute passes through a broken line of bluffs as it works its way down the bluff to rejoin the original trail. This newly constructed trail may be difficult to follow until it receives enough traffic to beat it in.

As the OHT continues to work its way down into Lawyer Hollow, it passes more streams and large rocks. At mile 155 there are open views down in Richland Creek Valley. In the distance, you can see a large somewhat squared rock formation called “Stack Rock.”

The OHT will cross over and follow several old roads from here. Be sure to keep a watch on the white blazes through here so you take the correct route. Just before mile 160, the trail routes hikers through an old grownup homesite then connects with a Park Service road.

Turn left to follow this service road for the next four miles. The blazes are few and far between on this final stretch of the OHT. Just remain on the road and veer right at the one intersection on it.

While hiking along the road, keep an eye out for elk in the open fields that border on the right. The elk herd in Boxley Valley have been migrating into this remote area of the forest.

At mile 162.8 on the left side of the road, there is a great bluff line known as “The Narrows.” This alone is reason enough for overcoming the hassle of arranging a hike on this section of the OHT. The Narrows is a narrow rock bluff that has the forest on one side and the Buffalo River flowing at its base on the opposite—a must see!

You should be able to spot a social trail up the steep hillside. Once you reach the ridgetop, follow the narrow four-foot-wide backbone up a small rise to reach the crest of the bluff. What a grand place to celebrate the completion of your OHT Adventure!

Once you scramble down from The Narrows, just a short hike remains to mile 164. Here you reach the Buffalo National River and the end of the OHT. You have a couple of options at this point: 1) You can cross the Buffalo River. 2) You can cross Richland Creek.

I have been able to wade across the river on the occasions I hiked this area. However, if the river is high, you might be able to ask a canoer to shuttle you across the river. Woolum is a popular takeout for boaters, and they are usually more than willing to help out a fellow outdoorsman.

If you choose Richland Creek, you can normally hike up Richland Creek to locate a shallower crossing. The crossing at the end of the OHT can be pretty deep. Once across the creek, you will then need to hike the Buffalo River Trail another 15 miles to Tyler Bend State Park, on Hwy 65.

Whichever option you select, use caution. Both stream crossings can be dangerous at times. 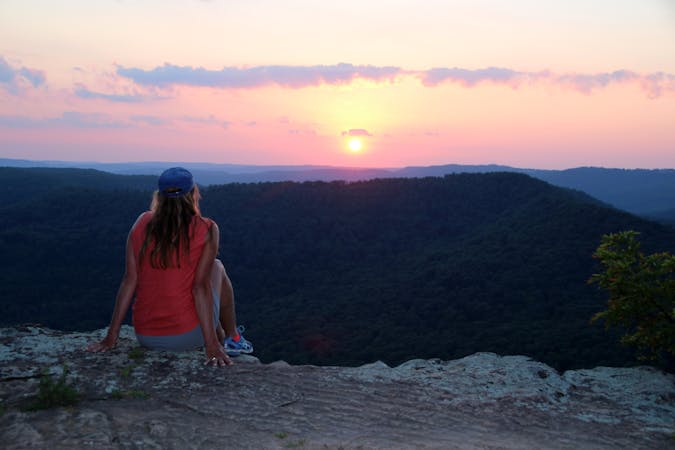