Climb out of Black Rock Canyon to an airy summit overlooking much of Joshua Tree National Park.

Warren Peak is a summit in the Little San Bernardino Mountains, located in the northwest corner of Joshua Tree National Park. Access to the trailhead is not through any of the park’s main entrances but through the Black Rock Canyon Campground. The start is the same as for Panorama Loop, which goes into Black Rock Canyon.

A ways up the canyon, which becomes increasingly narrow and closed in, you’ll pass a small, muddy spring and shortly after reach a fork in the drainage, where the trail diverges. This is where the loop portion of the Panorama Loop connects. Go right to head toward Warren Peak, and a little bit later go right again, at another fork. The path first goes up a smaller, steeper wash in a brushy valley, then comes to yet another fork, where left goes toward Morongo View, a lesser summit.

To get to Warren Peak, stay on the trail, which turns up the mountainside, then soon reaches a ridgeline. A final, steep section on the ridge leads to the peak and the reward of 360-degree views. It’s quite a dramatic summit, with a rocky pedestal at the very top. From there, you can clearly see across Coachella Valley to the mighty Mount San Jacinto, and over to the bald summit of San Gorgonio.

These views are similar to what you’ll get on Panorama Loop, but the trail to Warren Peak doesn’t go quite as high or stay on a ridgeline for nearly as long. It can be thought of as a slightly shorter alternative to the loop, or as a challenging addition to it. 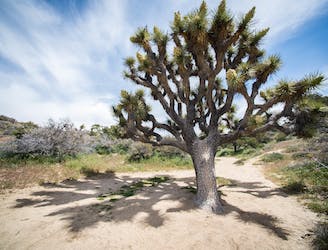 Hike through canyons and along a panoramic ridgeline, on this unique trail in an isolated corner of the national park. 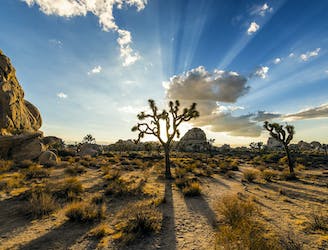