A longer alternative to the Two Ocean Lake Loop.

This run is a longer alternative to the classic Two Ocean Lake loop, beginning at the same trailhead and sharing much of the same path. Both Two Ocean and Emma Matilda Lake have a surface elevation near 6,900 feet, with many of the high peaks in the Teton Range towering well above the lakes at 12,000 feet. Many of the mountain peaks are a full mile above the surface of the lakes!

According to Wikipedia, "the lake is named after the wife of William O. Owen who was the first, along with three other climbers, to ascend to the summit of Grand Teton in 1898." Grand Teton is the peak clearly visible through the entirety of the run. Additionally, Two Ocean Lake "was named for Two Ocean Pass about 25 miles (40 km) to the northeast where Atlantic Creek flows east and Pacific Creek flows west," according to Wikipedia. The name, however, is deceiving since the lake flows solely into the Pacific Creek.

As with most lakeside loops in Grand Teton National Park, counter-clockwise is the preferred direction for the best views. Wildlife, especially bear, moose, coyote, and elk, are prevalent around the lake, and the National Park explicitly warns of their dangers. Though there have been no fatal bear encounters, there are a handful of documented attacks since the 1990s. While the park recommends carrying bear spray, bear bells and other similar noisemakers may also help to deter encounters.

After circling Two Ocean Lake, continue on to Grand View Point Trail. One mile in, you'll pass over its namesake vista, where you'll be welcomed with incredible views of the entire Teton Range. 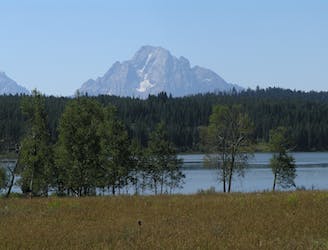 An easy, yet scenic, 10k trail run around a glacial lake with an abundance of wildlife. 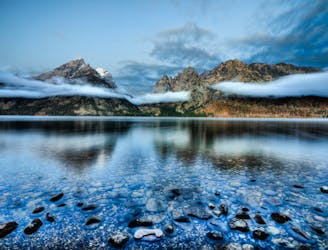 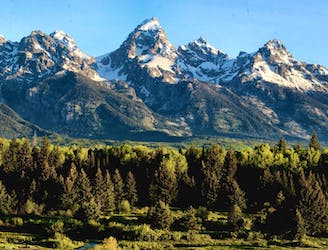