This is a highly rewarding mountaineering journey, taking in the summit of one of the high peaks of the Ecrins. It is a local classic requiring experience and good route-finding skills. It varies according to conditions, particularly in ascent, but always requires fitness and acclimatisation, as the very long descent sees morning sun, so is best not left too late. Confident down climbers will get away with a 50m rope, but many take 2 ropes for longer rappels.

Start by taking the track NW from the hut which heads up to and behind the Bosse de Sialouze. Head up the Glacier de Sialouze, aiming for the large obvious snowy couloir, which you then climb. This is Couloir Coolidge and is an easy snow plod in good conditions. Later on in the season it may be icy and impractical, in which case there is an alternative route up the rocks to the R, known as the Rochers Rouges. This leads you onto the large Glacier du Pelvoux, from where it is relatively easy to get to the main summit, Pointe Puiseux at 3943m. Perhaps resist the temptation to tag the extra summit, Mont Durand, as your descent is already going to be very long.

Descend the glacier E and then N. You cannot stay on the glacier beyond about 3420m as it becomes too steep and you need to take to the mixed ground on its L in descent. Look for a snowy crest then follow it and the rocky ground beyond. There are a series of sections of track, downclimbing and short rappels that taking you down to the flat glacier below at about 3100m. Cross the glacier to the R then climb up a short section via a fixed rope. Tricky downclimbing or a rappel follows, then you are on more snow. You are heading for a moraine crest on the L in descent, then steeply down to the E, and NE. At about 2070m there is a path split, L more easily to Pré de Madame Carle, or R very steeply down, as marked here, heading towards Ailefroide. This involves some downclimbing and follows a ledge system called the vire d'Ailefroide. It is important to follow this ledge right to its end rather than taking any straight down option via couloirs. Once below the steep ground it is an easy walk back to Ailefroide. 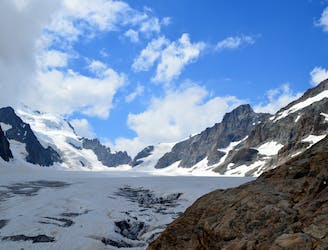 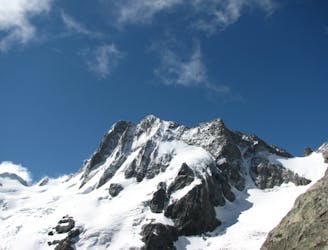 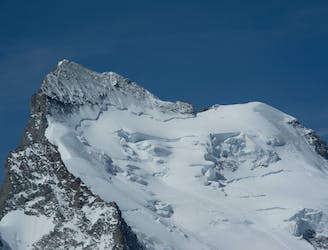 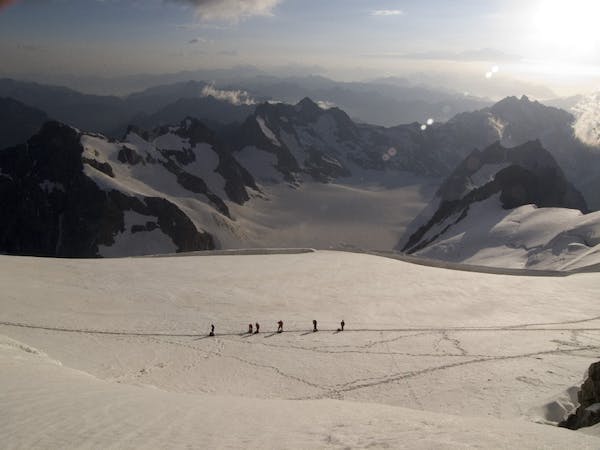