From the hut follow the well marked trail leading gently up rocky slopes. There are a number of path splits - make sure you don’t take the path leading direct to the Chabod Hut. The steepens up as you approach the icy tongue of the glacier at about 3150m. Depending on the time of the season it may be bare blue ice needing crampons, or possibly snow needing a rope to safeguard against crevasse danger.

Climb diagonally up R to gain easier open glacial slopes. At 3400m to about 3600m it is slightly steeper again as you pass through more mixed terrain. At 3740m you join the track coming up from the Chabod Hut and shortly after this there is a flattening in the glacier, at 3830m, below the Becca di Montcorve.

From here it is significantly steeper for a short distance, passing well to the R of some obvious seracs, before easy glacier leads you to the foot of the final summit ridge. There has been an agreement since June 2019 that climbers will make a clockwise ascent of the final summit block, details of which are in both the Chabod and Vittorio Emmanuel Huts, to avoid queueing in an exposed location. There is the odd bolt and iron rung, but no fixed ropes, so although exposed the final section is not difficult.

The summit itself is on a spectacular rocky tower and, having returned on your clockwise rotation down to the glacier, the descent to the hut is the same in reverse. Some choose to take the descent to the Chabod Hut, thus doing a traverse of the peak. 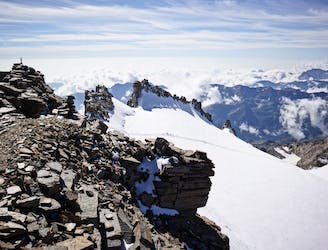 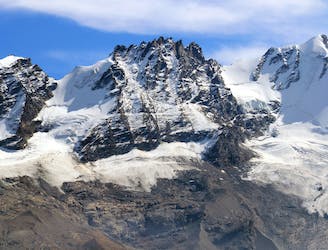 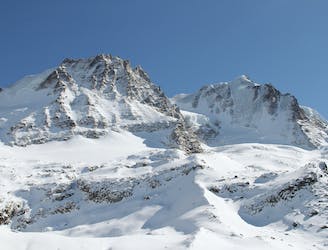