Castel Gavone and Castel San Giovanni are two of the best castles to explore in Finale Ligure—and this loop hike passes by both of them!

Begin your hike from Finalborgo, climbing quickly to Castel San Giovanni. If you're looking for a well-maintained tourist castle, this is your best bet in Finale Ligure. According to Wikipedia), "the current Castel San Giovanni was built with the aim of reinforcing the defenses from the Spanish from 1640 to 1644 on the ruins of a tower dating from the mid- fifteenth century." If you want to tour the inside, be sure to check on the castle's open times before you leave.

After passing Castel San Giovanni, the climb continues steeply up an old cobblestone road. Eventually, you'll have to leave the cobblestones for a rougher trail to reach the ultimate goal: Castel Gavone.

According to Wikipedia, Castel Gavone "was the headquarters of the Del Carretto marquises, lords of Finale." First constructed in 1172, the castle has been enlarged and fortified over the years, partially demolished, and then subsequently rebuilt… as with most castles.

In 1989, "the castle was donated to the Municipality of Finale Ligure, which is currently providing for a recovery aimed at the conservation and tourist enjoyment of the imposing ruins," according to Wikipedia. As of the time of this writing, you may not be able to access the castle directly, but you can still view it from the trail.

After enjoying the views of Castel Gavone, you can either turn around and head back down to Finalborgo the way you came or, for a little more adventure, traverse along the ridge on a narrow singletrack trail. The trail leads to a road, which passes by another ancient tower and a few buildings on the hillside.

Finally, descend a steep cobblestone trail back down to the valley floor. Instead of a boring out-and-back hike, you've now enjoyed an attractive loop hike and seen some additional historical sites—success! 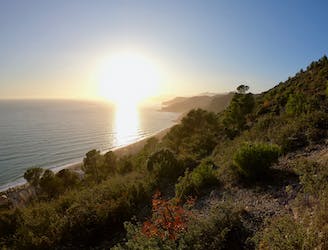 Enjoy stunning views of the Mediterranean on this short hike. 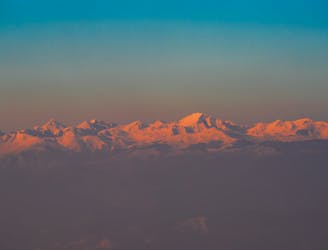 Stage 4 of the magnificent high alpine trail through Liguria. 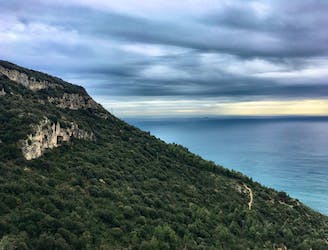 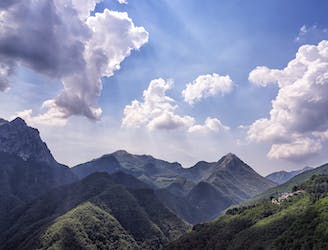 For Sea & Mountains, Hike the Alta Via Dei Monti Liguri