Xlendi to San Lawrenz via the Inland Sea

One of the finest hikes on Gozo which passes several of the island's best known landmarks.

This is a great trip which feels wild and remote despite its relative proximity to civilisation.

Start out in the bustling little village of Xlendi, where you'll find plenty of places to grab some food before setting off. Climb the steps on the north of Xlendi Bay and then scrabble up a series of rock slabs, the route through which is well marked by pink dots and the occasional cairn. This section up the slabs is the only part of the entire Gozo Coastal Trail which requires you do some (very easy) scrambling so if you want to avoid it, hike up the road from Xlendi towards Victoria and just before reaching the Tuta bus stop, turn left and follow an extremely steep concrete track up to the village of Kercem. From Kercem, follow the main road west to rejoin the hiking track.

Either route (up the slabs or along the road) takes you to a stunning track which winds along the top of the huge cliffs on Gozo's west coast. The track offers spectacular view after spectacular view and the only downside of the path is that is has to end! Eventually it leads you to the utterly stunning Dwejra Bay - an almost-enclosed inlet which has the famous Fungus Rock at its entrance. Fungus Rock has a cairn on top but it can only be accessed by a swim and is ringed by steep cliffs - whoever climbed the rock and built the cairn must have been pretty adventurous!

Continue descending to the Inland Sea and the former site of the Azure Window. A pretty unique feature, the Inland Sea is a shallow and contained body of sea water which is fed a narrow channel of water through a cave. Adventurous swimmers might consider swimming out through the cave and into the the open sea, which is a serious undertaking but does take you to the foot of some staggering vertical cliffs. Most people content themselves with a much more relaxed option - going for a float in the Inland Sea and having an ice cream.

When you've had your swim, take a stroll to the viewpoint which used to afford a great view of the Azure Window, a beautiful rock arch which sadly collapsed during a storm in 2017. If you've got a snorkel with you then it's possible to snorkel out to where the arch used to be and you'll see the remains of it on the sea bed.

Finish the day by climbing up above the inland sea and strolling into the charming village of San Lawrenz. 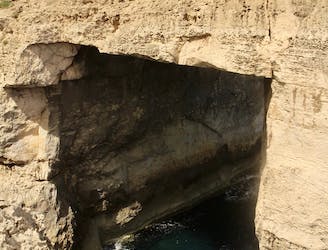 Possibly the highlight of the Gozo Coastal Trail - this is a gorgeous hike along a wild coastline. 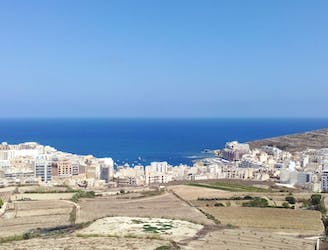 A fun little mini-hike to a local landmark

Marsalforn to Nadur via Ramla Bay and the Tal-Mixta Cave. 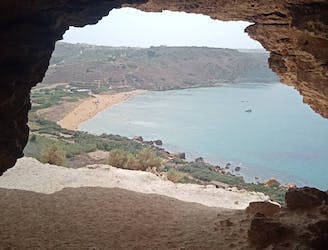 Go from seaside resort to peaceful village and pass through some fabulous scenery en route.

Marsalforn to Ramla Bay and Xaghra. 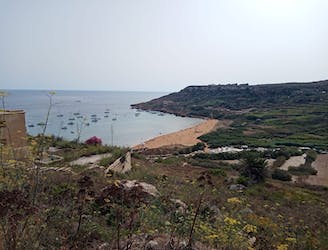 A rugged hike to a gorgeous sandy beach and then back through peaceful dusty streets. 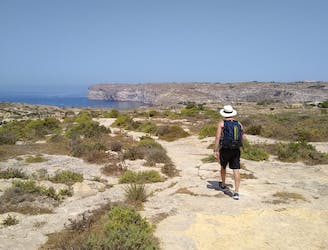 Go from Gozo's biggest port to one of its most popular beaches via some breathtaking clifftops. 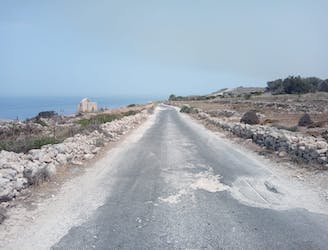 Travel between 2 of Gozo's main villages and visit 2 of its finest swimming spots. 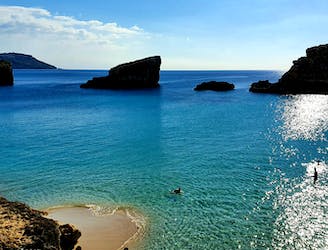 Hike around Malta's 3rd largest island in a single day! 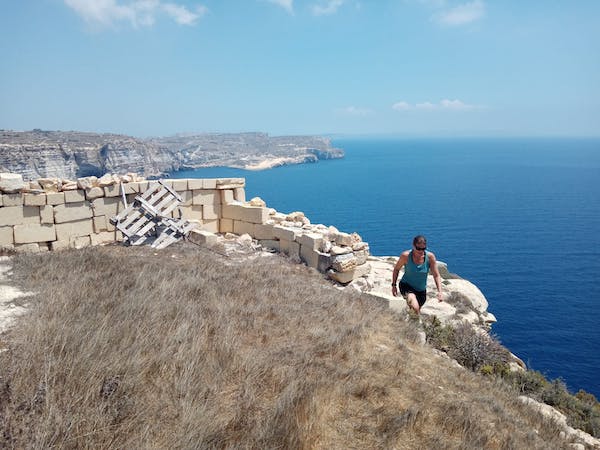