People have walked High Street for thousands of years, and they'll probably be doing so for generations to come.

The eastern fells may generally have a secluded feel but a hill the quality of High Street inevitably attracts attention. This flat-topped massif is best seen from the east, its craggy coves and ridges rising straight from the shore of Haweswater. The grand austere setting could almost be Scottish - perhaps reflected in the fact that for several decades golden eagles famously made their only English home here (the last, a solitary male, recently died). The Long Stile (aka Riggindale) Ridge runs above their official nest site in Riggindale, giving arguably the best route on the mountain. With highlights including the hill-crest Roman road that gives High Street its name and the ancient through-route of Nan Bield Pass this is a route with a sense of history. People have walked High Street for thousands of years, and they'll probably be doing so for generations to come.

From the car park go southwest through a gate and take the path around the head of the lake to join a trail on its far shore. Follow this along the base of a steep slope, climbing onto The Rigg, a pronounced wooded cape that juts into Haweswater.

At a path junction by the edge of the woods on the crest of The Rigg go left on a delightful path up the ridge, weaving among little outcrops. The minor top of Rough Crag is well named, and has a great outlook over Riggindale and along the length of Haweswater. Beyond is a little dip and then the steeper, rockier upper ridge, the Long Stile, which leads quickly to High Street's plateau. It's grassy and almost flat, and the alternative name Racecourse Hill indicates a historic use for this summit. Bear left to meet the Roman road and a wall, which both run directly over the hill's high point.

To descend stay with the Roman road and wall briefly, then curve left across open slopes where an incongruous over-engineered new path leads onto the broad top of Mardale Ill Bell. stay with the path to descend to the rugged pass of Nan Bield, where there's an old stone-walled shelter - perhaps originally for cattle drovers and other travellers who once used this through-route.

The trail, quite stony, now descends steeply to the shore of Small Water. Cross the beck flowing out of this tarn, then follow it downhill past some little waterfalls, passing below the steep face of Harter Fell to reach the car park. 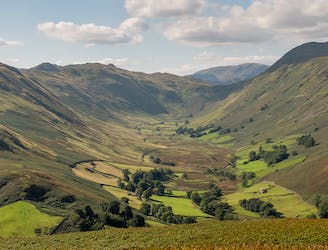 With a high start and a low summit this likeable mini fell must be one of the easiest ascents in the Lake District, by its standard route. 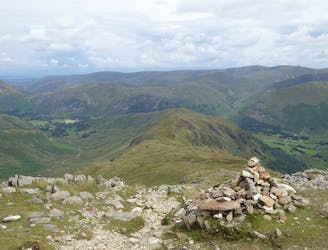 Place Fell rises alone, a hub-like point at the centre of a great arc of mountains running from Helvellyn and the Dodds to the High Street range.