Ben Nevis via the CMD Arete

A contender for the title of grandest ridge walk in the country, the Carn Mor Dearg (CMD) Arete straddles that fine line between rambling and scrambling.

This graceful curving line connects two four-thousand-footers, its blocky crest offering airy positions and stunning views of the cliffs of Ben Nevis, but minimal hands-on stuff. It is unquestionably the most enjoyable non-climber’s route on Ben Nevis, leagues ahead of the crowded and frankly dull trudge up the Tourist Track.

Start either from Glen Nevis Youth Hostel or from the visitor centre car park closer to Fort William. The former is steeper, the later slightly further - but there's more parking space, so this is the option highlighted on the map. Both routes meet at about the 160m contour. The well engineered Tourist Track then makes a long rising traverse above Glen Nevis, crossing a couple of little bridges before curving left above the cutting of the lower Red Burn. It now climbs steeply with a zigzag or two to reach a long easy incline near the ‘Halfway Lochan’ (Lochan Meall an t-Suidhe).

At a sharp bend turn left off the main trail onto a recently engineered path that heads towards the outflow of Lochan Meall an t-Suidhe. Stay with this trail just until a muddier non-surfaced path branches right, and take this over boggy moorland below the scree slopes of Carn Dearg to enter the Allt a Mhuilinn glen. The path now makes a slightly descending traverse beneath the huge North Wall of Castle Ridge. Meet the Allt a' Mhuillinn, and follow it up-valley towards the CIC Hut (not a public bothy), with the complex crags of the north face becoming ever more impressive above. Just before reaching the hut cross the burn, and the main Allt a Mhuilinn path (which runs up from the 'North Face' car park at Torlundy), and head straight up the slopes of Carn Dearg Meadhonach, picking your own line up unremittingly steep scree and grass. Any traces of path are easily lost but the general gist is (painfully) obvious. The top of Carn Dearg Meadhonach comes as a relief – eventually. Now follow the much-more-enjoyable crest roughly SSE to the summit of Carn Mor Dearg.

From here the view of the north face of Ben Nevis is as good as it gets. Beyond this sharp summit the CMD (Carn Mor Dearg) Arete begins, and so does the real fun. The ridge forms a narrow arête of rounded blocks, sweeping around the head of the corrie in a grand arc to link CMD with Ben Nevis. There is always a well worn path weaving just below the rock steps, but it's generally more entertaining to stick to the true crest. The situations are spectacular and it's a little exposed at times, but the proper scrambling is minimal. Care is obviously needed in wet, icy or windy conditions though. After making a rightwards bend the ridge drops to a low point of 1058m before climbing to meet the main mass of Ben Nevis at a point marked by a large cairn (built 2012) which marks a possible escape right into Coire Leis (this is not a very pleasant way to descend in any season, especially in winter when it can be very icy). The final ascent onto Ben Nevis is a long, thankless trudge up a boulder-strewn slope. In poor visibility and particularly in winter it's worth being particularly aware of the lip of the Brenva Face, just off to your right. An intermittent line of metal posts marks a safe route. On reaching the stony summit plateau bear left to the summit trig point and nearby ruins of a Victorian meteorological station. If needs must there's a shelter here, often used by the anti social as the highest toilet in Britain. Descend the knee-jarring Tourist Track. Especially (but not exclusively) in winter, the summit plateau of Ben Nevis is a pretty serious place, surrounded on almost every aspect with steep fall-off-able ground and edges that can be heavily corniced. In poor visibility accurate navigation may be called for. A rank of new cairns indicates the safe way off, their size suggesting the possible depth of snow cover; if even they are obscured walk 150m from the trig point on a bearing of 231° grid to safely skirt Gardyloo Gully, then 282° grid for nearly 1km, bearing in mind the unseen presence of Five Finger Gully on your left, (scene of too many accidents) to reach the obvious zigzags of the Tourist Path. This stretch of the trail has recently enjoyed a partial re-surface, so not all of it is as unpleasantly stony as it once was. Follow this path past the junction just above Lochan Meall an t-Suidhe (as described in stage 2) and retrace stage 1 back to Glen Nevis. 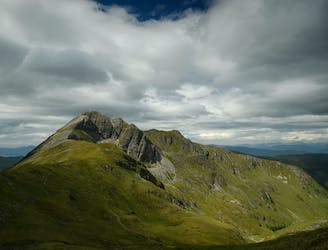 With a smattering of scrambling in summer and more than a hint of mountaineering in winter, this is a shorter, easier alternative to the neighbouring Ring of Steall - but no less worthwhile.

The Grey Corries from Glen Nevis 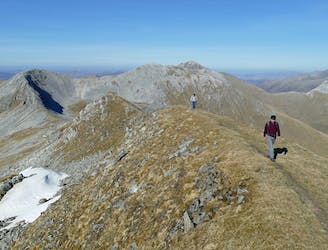 A long and challenging classic ridge walk with a feeling of remoteness. 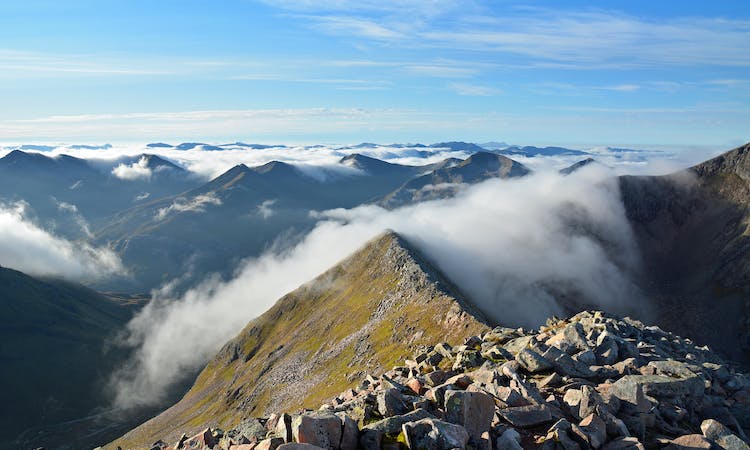 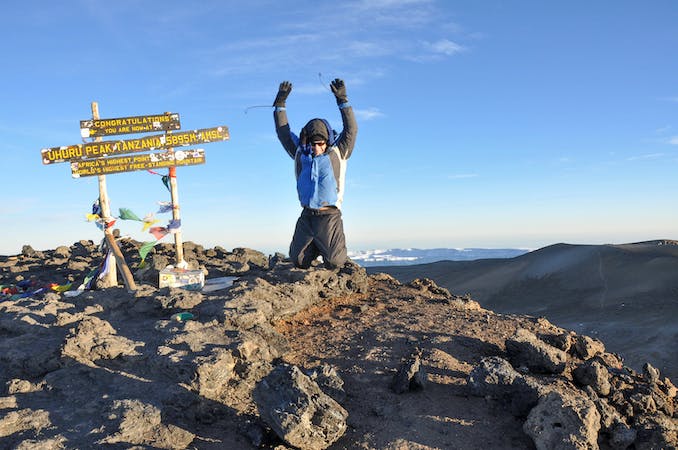