Bolinas Ridge is the east rim of the valley where the San Andreas Fault lies, in Golden Gate National Recreation Area. Though the fault itself is buried far beneath the forest soils of Olema Valley, the parallel ridgelines on either side are topographic evidence of the active rift zone below. On the surface, it’s an idyllic land of rolling meadows, patches of oak-chaparral, and deep ravines of redwood groves.

The Bolinas Ridge Trail, in full, is an 11-mile one-way on a fire road along the crest. Approximately half of it covers the wide-open north end of the ridge, and the rest is the forested southern section. The route described here is an out-and-back through the expansive views of the northern end. It begins from Sir Francis Drake Blvd near the town of Olema, at a gravel pullout with a signed trailhead. From there it climbs steadily on the rounded, rolling ridgeline.

Views on either side are of more hills all around, and on a clear day, they get better and better as you climb. To your right is the Olema Valley, where the San Andreas Fault lies, with redwood and fir forests on the other side. To your left, you gaze at a patchwork of woods and meadows on neighboring hillsides. Look over your shoulder to see the blue of the Pacific Ocean in Tomales Bay. When you decide to turn around, you’ll find the best views yet in the opposite direction, looking downhill and out over it all.

The color of the landscape changes with the seasons. Come in spring for a truly pastoral setting--slopes covered in vibrant green, peppered with gray boulders, and popping with yellow and blue wildflowers. By fall the fields dry to a golden brown but remain crowned by evergreens.

Dogs are permitted on leash on Bolinas Ridge, which is nice because most trails in the immediate area do not allow them. Horses and bikes are also permitted on this trail, and it passes through rangeland where you are likely to encounter cows. Respect their space, and they’ll respect yours (this goes especially for your dog).

As mapped, this hike turns around at the junction with Shafter Trail, which leads to Samuel P. Taylor State Park. There is of course the option to hike farther along Bolinas Ridge, entering the wooded southern half. Other trails besides Shafter intersect with Bolinas as well, so you can alternatively devise a loop through the state park or through Olema Valley. 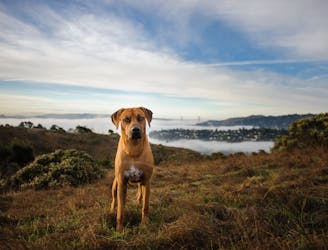