Lassen is a volcanically active region, with several eruptions that occurred in the recent past. One of the youngest volcanoes is called Cinder Cone, simply named for the type of volcano that it is. Cinder cone volcanoes are formed by ash and lava spewing high into the air. This one popped up less than 400 years ago and buried the surroundings in ash and lava flows.

Today it’s a blackened moonscape, fringed by forest that’s slowly reclaiming the eruption zone. A trail leads through this otherworldly landscape and climbs to the top of Cinder Cone. It’s not a long trail, but still rather difficult because of the loose surface and steep slope on the volcano.

The trail starts at Butte Lake, going first through a forest of tall pines on relatively flat ground. On one side is a wall of gnarled black rock. This is the edge of the Fantastic Lava Beds, where dense lava flowed from the base of the volcano and solidified. The trail finds an up-close view of the lava, then continues toward the volcano.

Suddenly the trees disappear, and the trail emerges onto a barren, black plain, with Cinder Cone just ahead. The gravelly rocks that cover the land are bits of lava that cooled as they fell from the sky. The path up the cone is obvious, but the going is tough on the loose cinders.

Once on top, you’ll have an incredible view over the blast zone. You’ll see the whole path of the lava flow, plus colorful cinder hills called the Painted Dunes and a handful of lakes formed by lava dams. You can peer down into the crater of Cinder Cone and walk around the rim on an extension of the trail. You can even descend into the pit of the crater if you’re prepared for the climb back out. 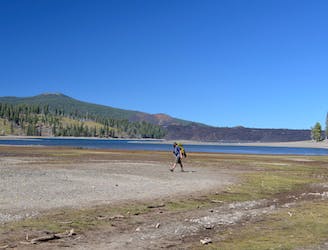 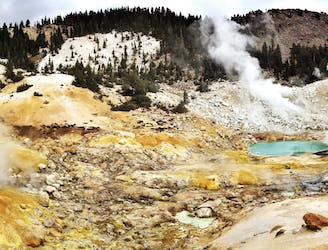