This overnight loop leads into the Caribou Wilderness Area and some of the most remote territory in Lassen National Park. The trail between Jakey Lake and Widow Lake, in particular, is rarely maintained and can be tricky to follow in places. Camping at Jakey Lake is superb, and is the typical place to spend the night if doing this loop in two days. To make it three days, you could also camp at Snag Lake or Widow Lake. On this route, you’ll also have the tantalizing options to summit two notable cinder cones. The first is the one simply called Cinder Cone, near the Butte Lake Trailhead. The other is Red Cinder, which is the highest point in the Caribou Wilderness, and is located in the remote middle of the loop.

Starting from Butte Lake and heading clockwise on the loop, you’ll begin in pine forest but soon emerge on a barren plain of sandy cinders near the base of Cinder Cone. Though relatively flat, hiking this terrain is tough because of the loose surface. A popular trail leads to the top of Cinder Cone. If you tackle the climb, you’ll earn a birds-eye view over most of the terrain that the loop covers. If you wish to skip it, follow the signed bypass route toward Snag Lake.

The trail then traces the rugged perimeter of the Fantastic Lava Beds for some time, staying mostly on the cinders with very little shade. It then outlines the west shore of Snag Lake through a burned area, and eventually crosses its inlet stream on a footbridge. Another trail traces the east shore, where there are some good campsites. Though that trail is not part of the loop mapped here, a detour to camp may be worthwhile if you’re on a 3-day itinerary.

From Snag Lake, the trail turns uphill and keeps a persistent gradient all the way to Jakey Lake. Climbing into the high country, it’s mostly forested but dotted with meadows and marshy ponds. Jakey Lake is the largest of a cluster of small lakes, set at about 7000 feet elevation. It’s surrounded by fairly dense forest but has a few beach-like areas for camping on the west and east shores. Seasonal ponds exist higher along the trail, but this is the last reliable water source until Widow Lake.

The next section is some of the most remote trail in the national park. The route crosses cindery soil where the path can be hard to distinguish. It ascends to the highpoint of the loop, at a wooded pass between two cinder hills. The one to the east is Red Cinder, which rises to 8,375 feet. An unofficial route goes from the pass to its summit, if you wish to add this achievement to your trek. From there, it’s downhill through a similar forest to Widow Lake, which makes another good camp spot for a longer itinerary.

A very steep trail leads down from Widow Lake and soon reaches the well-traveled east shore of Butte Lake. From this nicely forested bank, you’ll gaze across the water at jumbled black rocks of the lava flow, which partially filled in the lake. After crossing the outlet stream on a footbridge, the trail pops up and over a little ridge, then meanders toward the Butte Lake trailhead to complete the loop.

Note that a backcountry permit is required for camping along these trails. There are no designated sites, but you’ll need to plan approximate camping locations to fill out the permit. Visit the national park website for more information on backcountry regulations. 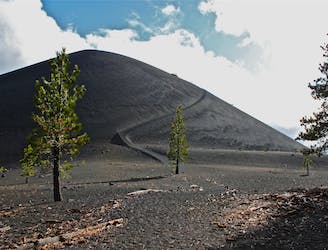