A big classic of the Annecy area with incredible views of the Lake.

A popular classic with the Annecy locals and one to put on the ‘must do’ list in the area. The views of the surrounding mountains are very good but it is the view of Lake Annecy from the summit which is unique on a clear day. Good snow coverage at lower altitudes is required to make the ski tour feasible.

La Tournette is a long ski tour requiring stable snow conditions and reasonable visibility especially for the final traverse to below the summit, which is above a cliff band. As well as boot crampons and an ice axe for the short section of mountaineering at the top, it is strongly recommended to carry couteau (ski crampons), in case the snow is firm. It is also advisable to bring a short section of rope and a harness for the summit block in case conditions, ability or confidence are in question.

From the parking skin up the long section of track which is in the forest. As you leave the forest into open ground you will see the long section ahead which is a rising traverse. The terrain is generally not steep but you may need the occasional kick turn in places. It is worth picking the best line you can through the small slopes, ridges and reentrants on the way.

After this section skin up a broad steepening couloir with a few kick turns before turning round to the final traverse above the cliff band. This traverse is mostly on fairly mellow terrain but it is a terrain trap with the cliff below. At the end of the traverse go up to the bottom of the ladders and other metalwork and transition into boot crampons, take your ice axe and leave your skis. The ladder may be partially buried and will take you to the short walk to the summit cross. The deep blue of Lake Annecy and the surrounding area is an amazing sight seen from the summit and a real contrast to the view in the other direction.

Reverse your route back to your skis and transition for the ski descent. The ski down is the same as the way up but there are lots of opportunities in the terrain to maximise the snow conditions. Be careful not to drop too low though as you need to gain the forest path again. The forest path that takes you back to the parking can be rutted and hard after some traffic so good combat skiing techniques may be needed. 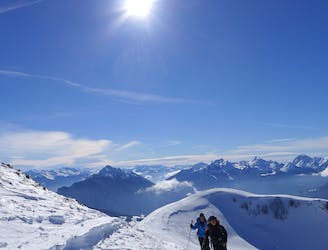 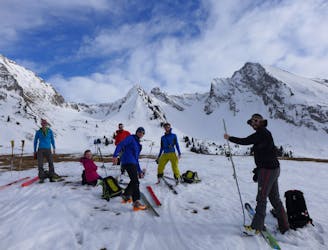 An excellent introduction to the stunning area around Mont Charvin. 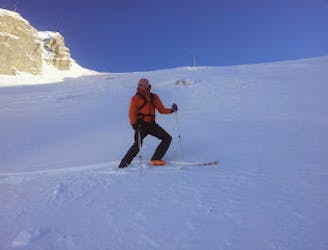 A scenic tour which comes into condition quickly and therefore makes for a good early season objective. 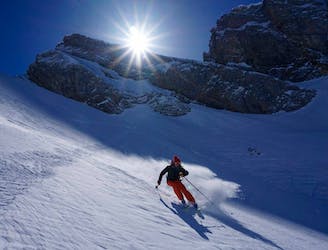 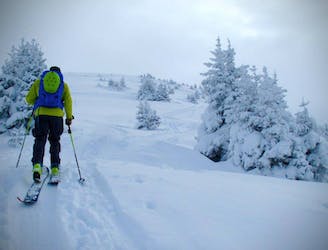 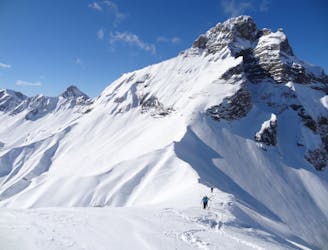 5 High Mountain Ski Tours Within an Hour of Geneva 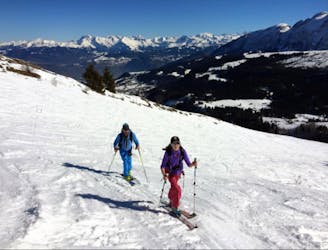