This is a shorter and easier alternative to the more demanding Arnøyhøgda - with equally good skiing. For a long way it follows the Arnøyhøgda SW route:

The tour begins right on the road - there is only one on the island. Cross the initial flat plains to reach a drainage, which you can ascend on either the right or left side (in spring time the right can be hard in the morning - the left side is often softer from the morning sun). You reach another plateau. The easiest way onward is to work along a bench, ahead and beginning on your left. On the bench you are exposed to an avalanche path on the south face of peak 822 m - make sure you cross it early in the morning. A wide valley brings you a ridge. It is recommended to ascend the slopes to the right of the ridge and cross onto the ridge higher up - the ridge itself is often quite icy due to strong winds. On this slope you depart from the Arnøyhøgda route. Ski crampons may be required due to the slope's exposure to wind and sun. Continue up the slope and head right towards the top. An easy ridge brings you to the top. Be careful at the summit - there is fall danger on either side!

To descend you can follow the same route down, or, better, take the NE route - the snow is often good there late into the season due to its exposition and shelter from wind. Go down from the summit and head to the col between Laukslettinden and Arnøyhødga (there is an alternative drop-in at the big rock formation - you will see a ramp leading into the route). Ski the initial pitches keeping right, working several lower-angle rolls. Lower down you can ski in the valley bottom, hanging a right as the gradient eases and the valley opens. Find a line through the trees and bushes at the bottom. Keeping right here helps (aim at the houses on the road). To get back to your start point, either walk or have the folks at Lauksletta Overnatting near the start point pick you up and get some coffee and waffles there.

Attempt this route only in good visibility. The route requires good route-finding skills. Some steep rolls and drops need to be navigated around. The route is drawn from memory of having skied it many times. Do not blindly follow the track shown! 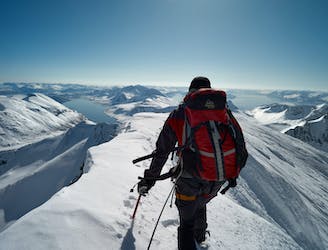 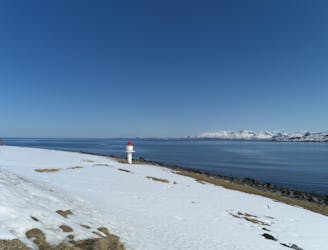 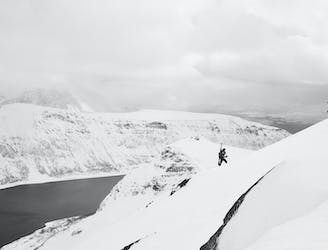 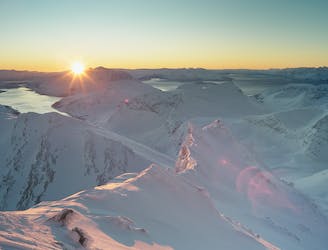 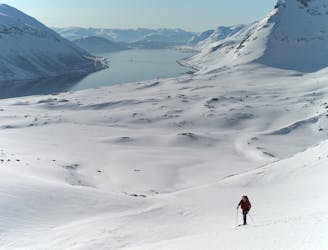