This loop meanders along the rim and back through Frijoles Canyon.

For a long day out, this 14.2-mile loop hike covers a whole lot of varied terrain! The trek feels more like a long ramble than a strenuous endeavor, but it will definitely be a full day exploring Bandelier National Monument's backcountry.

The best way to tackle this gorgeous loop is to start on the Long Trail from the Visitor Center picnic area, connecting with the Frijoles Rim Trail as it ascends. The majority of the Rim Trail is on a beautiful mesa that periodically allows stunning views down into Frijoles Canyon.

After a long meandering hike along the rim, look for the intersection with Middle Frijoles Trail at the Upper Crossing of Frijoles Creek. This is where the hike becomes a loop as it drops 400 feet4 down to the canyon floor. A series of steep switchbacks can be seen across the narrow canyon ascending to the Ponderosa Campground, but the loop route follows the canyon all the way back to the trailhead.

In 2011, the upper end of the Canyon burned to a crisp, then was flooded, which carried an astonishing amount of trees down-canyon all the way through and past the visitor center and down to the falls above the Rio Grande. The Monument staff and volunteers have been working to reconstruct the canyon trail, but it is possible that a portion in the middle is not yet done, or that another flood undoes the work. Expect to clamber over and under downed trees to connect the trail if floods have occurred.

The canyon bottom along Frijoles Creek is beautifully lush, with burnt trees for a stark contrast. Viewing the massive log jams that were deposited during the floods following the 2011 fire is sobering. They are piled over 20' higher than the gentle little burbling creek you will cross and re-cross many, many times. Anyone who doubts that Mother Nature can, has, and will again do whatever she wants, might take a look at the power of her work. Always remember that a canyon like Frijoles is no place to be during rainstorms; there is truly no way to escape when the water rages between the steep walls.

After the route passes through a very narrow part of the canyon and the trail gets closer to the trailhead, it becomes more defined and “civilized.” If there is time and you have the energy, be sure to visit the popular Ancestral Pueblan Alcove House, located along the way about a mile from the parking area. It is an ancient dwelling in a cave 150 feet up the rock wall. There are four ladders that comprise the 140-foot ascent to the Alcove House, allowing visitors to explore the fascinating place. This is not, however, an option for those with a fear of heights!

Stroll the last mile back to the trailhead alongside the crowds that were left behind for the majority of the 14-mile loop. 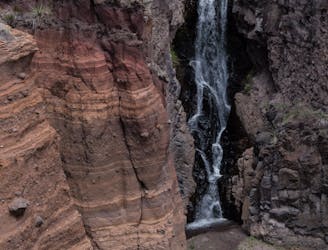 A 1.5-mile hike to a beautiful waterfall. 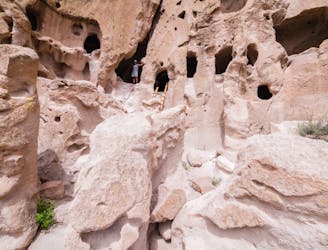 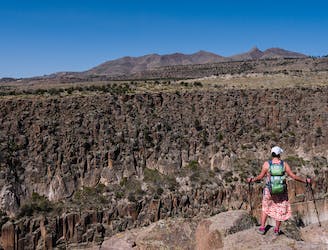 A long hike through wilderness canyons to an ancient ruins.

A historical 550-foot switchbacking descent to the Visitor Center. 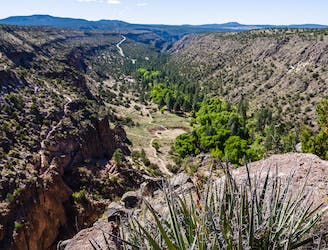 View of the canyon from Tyuonyi Overlook. 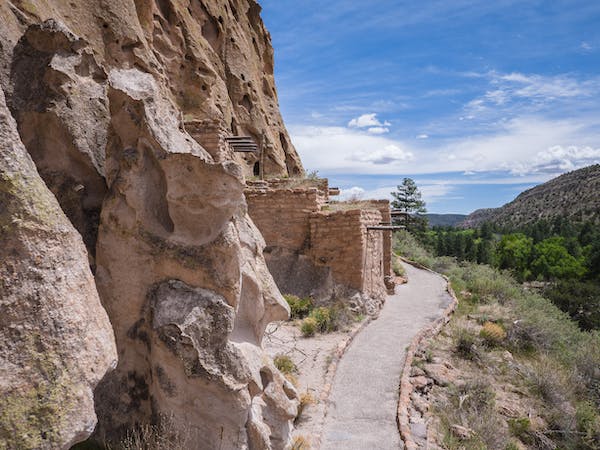