This short hike to a high plateau provides 360° views.

The hike begins at a very popular trailhead, which requires a recreation pass (either a Red Rock Pass or a Federal Interagency Pass). Park at the Doe/Bear Mountain trailhead and start hiking directly from the parking area.

The Doe Mountain hike is most definitely not a long one if the only destination is to the top (under a mile), but it is a rewarding endeavor if you choose to circumnavigate the edge of the plateau.

Due to its brevity, and only gaining 450', the route to the top is quite heavily populated with hikers. Once at the top; however, the numbers thin considerably and solitude is easily found.

The trail is well-built and climbs kindly via numerous switchbacks until just before gaining the plateau. At that point, a bit of scrambling is required to negotiate a narrow slot. There is a signed trail at the top that takes hikers southeast across the plateau to a stunning overlook.

Allow plenty of time to circumnavigate the edge of the plateau as the views from every new location are beautiful and different from the ones before. It is important to note that, except for the signed trail that initially crosses the plateau, the rest of the hike will be via a large network of “social trails.” By staying relatively close (where safety allows) to the rim, it would be difficult to get lost, but using a navigation tool is a good idea.

Before beginning the descent on the same trail used for the ascent, look across at the imposing Bear Mountain. If you have already hiked the Bear Mountain Trail, this view is visual evidence that it was a truly worthy one... if you have not and are considering it, you'll be able to see what's in store. 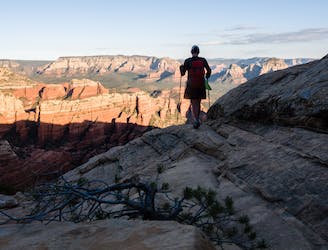 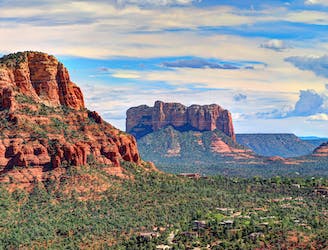 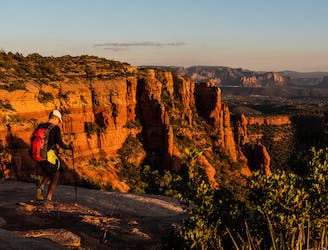